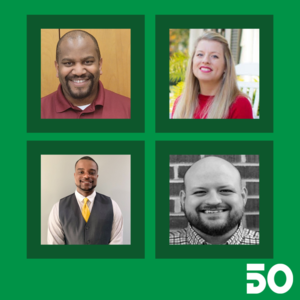 Emerald High School and Greenwood High School will have new faces on their administrative teams for the 2022-2023 school year.

Charles Johnson will be an Assistant Principal at Emerald High School next year. Johnson has worked in District 50 as a Project Lead the Way instructor at the G. Frank Russell Technology Center for the last seven years. Johnson was the 2016-2017 Teacher of the Year at the G. Frank Russell Technology Center. Prior to working in District 50, Johnson served as a Gateway to Technology Instructor at Greer Middle School and he was the middle school soccer coach.  He was also the head wrestling coach for Greer High School. Johnson began his teaching career at the Newberry County Career Center where he started the Project Lead the Way Program. While in Newberry he coached middle school football at Newberry Middle School and wrestling and soccer at Newberry High School. Johnson obtained his bachelor’s degree in industrial technical education from Clemson University and received his Master of Education in Administration and Supervision from Anderson University.

Jessica Sprouse has been named as the new Assistant Principal at Greenwood High School. Sprouse is currently a Spanish teacher at Greenwood High School. During her 15 years in education, Sprouse has served as a Spanish teacher and athletic coach at Emerald High School. She has also served as the World Language Facilitator in District 50. Sprouse graduated from Lander University with a bachelor’s degree in Spanish in 2007. Sprouse has earned a Master of Education in Educational Curriculum and a Master of Education in Administration and Supervision from Anderson University.


Kelcey Stevens will be the Assistant Principal at Greenwood High School. Stevens has worked as a physical education teacher at Greenwood High School for 9 years. During this time, Stevens has also worked as Greenwood High’s Head Varsity Boys Basketball Coach. He was named Region Coach of the Year in 2017-2018 and again in 2018-2019. He also was recognized as the South Carolina Basketball Official Association District Four Coach of The Year in 2018. Stevens has over 18 years of experience in public education serving as a physical education teacher, assistant coach, and head coach at the middle and high school level. He was also named Teacher of the Year at Saluda High School in 2013. Stevens received his bachelor’s degree from Lander University in 2003 and his Master of Education in Educational Administration  from Lamar University in 2019.


Aaron Acord will be the Assistant Principal at Greenwood High School. Acord has served as the band director for Emerald High School and Westview Middle School since August 2020. During his 10 years in education, Acord has served as a middle and high school band director in Wyoming County School District in West Virginia, Lexington County School District Two, and Anderson School District 5. Acord graduated from Anderson University and received his Master of Education in Educational Administration from the University of South Carolina.