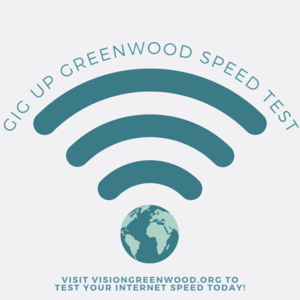 The Gig Up Greenwood Speed Test is now available on the VisionGreenwood website at www.visiongreenwood.org!

VisionGreenwood recently announced that it has formed the Greenwood Broadband Task Force (GBTF) to help bring broadband connectivity to all areas of Greenwood. This much-needed initiative is a collaboration with South Carolina Senator Billy Garrett, who serves as Chairman of the GBTF as well as the Greenwood County Legislative Delegation. A primary motivating force for Senator Garrett, the Legislative Delegation and the GBTF is making broadband accessible to all Greenwood-area children for current and future virtual classroom learning.


The Gig Up Greenwood Speed Test is now available on the VisionGreenwood website at www.visiongreenwood.org. VisionGreenwood encourages all Greenwood residents to test their broadband speed. The Gig Up Greenwood Speed Test may be performed multiple times on any device that has an internet or cellular connection. The test takes less than one minute to complete, and no personal information will be collected. Take the test today by visiting www.visiongreenwood.org!